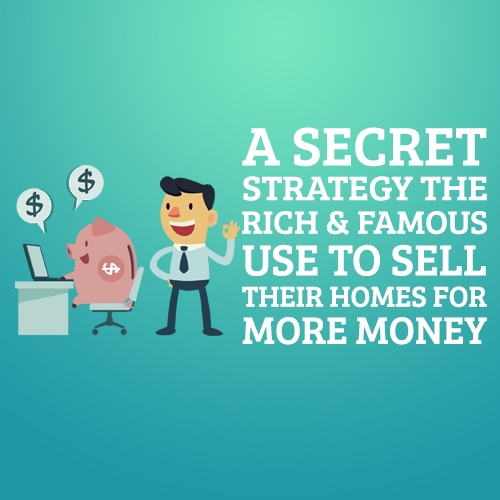 The rich and famous use this secret strategy to sell their homes. In one instance, a real estate reported using this strategy caused one condo to sell for $110,000 more than a similar condo in the very same building.

Why did one condo sell

for more than the other?

One seller knew the secret strategy, and the other did not! In reporting, the real estate agent mentioned having intimate knowledge of both condos. Neither listing was bank owned, a short sale, or a distress sale. The only plausible explanation of why one home sold for more than the other was the seller’s use of this secret home selling strategy.

This strategy is effective in any market. No matter what type of property is being listed, this approach works. It applies equally to homes, apartments, townhouses, or condos. Agents and sellers using these tactics have a greater chance of closing a sale for more money.

Here’s how this particular real estate agent discovered the secret strategy, almost by accident. He met a wealthy executive who was interested in selling his condo. However, the man has a special request.

He was willing to hire the agent, but in one condition. The real estate agent must agree to use the man’s secret method to sell the condo. It sounded crazy, and the agent was naturally skeptical.

On the other hand, selling the condo would bring a handsome commission. Conversely, if it did not work out, their agreement would expire, and he would walk away.

much lower than this listing.

The agent was skeptical the condo would sell for the $554,900 price. On the other hand, the owner’s secret strategy was intriguing, and market, and he waited to see what would happen.

Almost immediately, he began to doubt the strategy. The condo was showing regularly, but no one was making offers. People were just walking through and leaving.

To make matters worse, most visiting agents thought the condo was overpriced. They could not understand why the owner was asking for so much money, after all, a similar condo just around the corner was available for $100,000 less! They counseled their buyers to keep looking and left without making offers.

The story is real. The condo had no special attraction that set it apart from the others. This unit was not a penthouse. It was on the 6th floor of a 10-floor complex. The top floor units were not penthouses either. And the other agents were not wrong. The price was high.

Still, the owner stood firm. One day, 4 months and many showings later, another buyer walked in. this time it was different. This buyer loved the condo the moment he stepped through the doorway. He made an offer before he finished the tour.

The agent could not believe what he had heard! He rushed to call the owner. The owner accepted the man’s offer, while the agent began to worry. Maybe the buyer would find out they were overpaying. Maybe it would all fall apart. But no, everything worked out.

The strategy they used was a huge success! Naturally, the real estate agent was thrilled. So was the owner. He made a substantial profit.

The price was $110,000 higher than the previous condo that has sold two and a half months earlier for $439.000. The higher price was not because prices were rapidly increasing.

Would you like to use this secret strategy to sell your home for more money? It does take some extra time and some extra work. But, as you can clearly see, the payoff is well worth the effort.

What is the secret strategy?

What was the special request the wealthy home seller had for his agent? It was simple. He wanted to stage the condo.

Staging is the act of sprucing up a home to make it as visually appealing as possible.

It might sound crazy, but it causes homes to sell for more money. In fact, a whole lot more.

May agents encourage sellers to stage their homes. However, very few of them could ever show you a case study providing it will actually help your home sell for more money.

Fortunately, this real estate agent knew he was on to something. He began researching everything he could find on stage, and the impact it has on sale prices.

He put his findings together in a big write up sharing the tactics the wealthy seller had taught him. He included all the examples he had found as case studies.

The next chapter is an excerpt from his report, with one of the case studies he recorded.