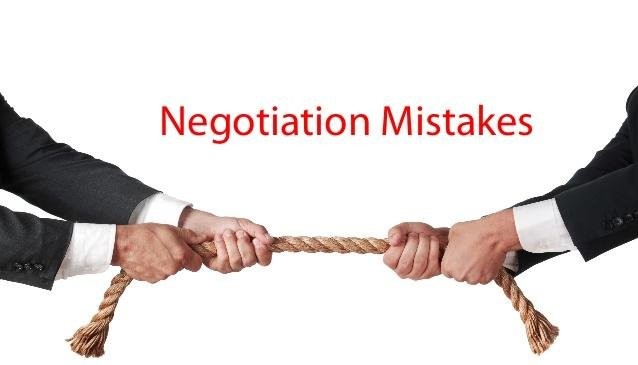 Not learning the other party’s motivation.

Price isn’t the only reason people buy. They may really like a certain feature your home has. They might be willing to pay more because of that feature.

Sometimes they might absolutely love that feature. They have been hunting for a while and finally found a home meeting their needs completely. That means they are willing to pay more for your home.

If you meet buyers, you should ask them why they are buying a home. They might tell you they are being transferred and have to find a home by a certain date.

If you know that, you will be able to negotiate a higher sales price. If the buyers have an agent, ask the agent for information. Here are some questions you can ask:

You shouldn’t be as blunt as that. However, you can often find the answers to these questions in a roundabout way.

For example, you could say, “You will love our town because of the X (insert a unique feature of your town). Do they have an X where you live now?”

That will start the conversation about where they are moving from. You can learn a lot from what they say. It will be helpful during the negotiations. You would be amazed at what some people will tell you.

Meeting in the middle.

(This is the most common mistake novice home sellers make). It’s the easiest way to sell your home for $10,000 less than you should. I don’t want to come across a cocky, but meeting in the middle is not a good strategy.

It’s the most common thing everyone does and the problem is everyone thinks they have to do it. That’s a big mistake. There is no rule book that says you have to “meet in the middle”.

The agent told the seller to reject the offer and told the other agent they should come back with a better offer. (The house had only been on the market for 2 days).

The buyer came back and “Met in the middle” with a $230,000 offer. The agent knew they were serious buyers and really wanted the house.

The seller thought the buyer was being a good person by “meeting in the middle”. He was willing to accept the $230,000 offer.

The agent told him to give a little, but not “meet in the middle”. He recommended that he counter at $237,500 and see what happened.

Don’t meet in the middle. Instead, give 10-20% and let the other guy give 50%. You’ll gain a little more in each round of negotiations.

This is the worst sin of negotiating. Don’t tell the buyers or their agent your life’s story.

What do you think would pop into a buyer’s head if they heard this out of a seller’s mouth? “We must sell the home because it is in foreclosure, and if we don’t sell it by June 23rd, then the bank will foreclose on it.”

This is an extreme example, but it shows you how a simple slip of the tongue could cause a seller to lose a large amount of their hard-earned equity.

A seller facing foreclosure in that situation might be desperate enough to “get out” with none of their equity just to avoid foreclosure.

But, what if the buyer was willing to pay the market value for the home? The seller just lost all of their equity! When a buyer asks why are you selling, answer them without giving away any extra information.

You could say, “Oh, we would like to move to Omaha”. (Or whatever place you are moving to). You don’t need to say much more than that. And don’t tell them you have a job transfer!

Many buyers will ask what your bottom line is. They know they can usually negotiate a home seller down to an even lower price.

Don’t fall for it. You’ve already made the first move by setting a price for your home. Tell the buyers you need to think it over and get back to them.

The reason this rule is so important is in some negotiations, you may offer more at the beginning than the other party is willing to accept.

If the seller had mentioned an opening price first, he would have saved $500! Instead he lost $500.

Letting your ego get involved.

What is your final goal? You want to sell your property quickly for top dollar, right? Keep that goal in mind during the entire negotiation.

I have seen people kill a potential top dollar sale simply because they didn’t like the buyer. Or the buyer started negotiations with a low-ball offer and the seller got offended.

“I refuse to negotiate with someone who insulted me with that lowball offer”, they said. And a good buyer moved on to buy another house.

Most lowball offers can be negotiated to a higher price.

Someone with a big ego that tells people off and walks around like they own the world. They think being abrasive and rude will get them a better deal. They’ll know around “take it or leave it” offers.

I can tell you from personal experience most buyers are willing to pay more than their “take it or leave it” offer.

You just have to keep the negotiations going, even though you might be a little unhappy or angry with what they are doing.

I have seen home sellers tell off a buyer that said something rude. That buyer could have bought their house. The buyer might actually be a very nice person. Keep your eye on the goal and don’t get distracted by petty things. You want to sell your house for top dollar.

Let anything a buyer says that is rude, or otherwise offensive, roll off like water off a duck’s back. It means more money for you in the end. That is the best feeling of all, far better than telling them off!

Failing to take time on the counteroffer.

Many times, you will be pressured to reply right away to an offer. Buyers are impatient and if they really like your house, they will want an answer to their offer right away. But do you know what else that means?

They are probably willing to pay more for your property.

Take the time to talk to your real estate agent. You need to take a little time and consider the situation.

Have you been able to find out any information on the buyers? Use that to put yourself in the buyer’s shoes. A little space and an objective third party will lead to more effective decision making.